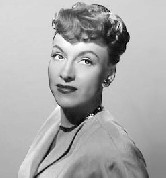 Virginia Gregg was many things over radio. She landed recurring roles most often playing detectives’ girlfriends and girl Fridays. She was Nicki Porter to Lawrence Dobkin’s Ellery Queen, Clarie Brooks to Bob Bailey’s George Valentine, she was Helen Asher to Dick Powell’s Richard Diamond, and then she was Betty Lewis to Bob Bailey’s Johnny Dollar.  She was also Miss Wong,  the Chinese Girlfriend of Ben Wright’s Hey Boy on Have Gun Will Travel.

As impressive as these numerous recurring and ongoing rolls were, it barely touches on the depth of what she contributed. She was a true artist, a character actress par excellence. She could play a dozen femme fatales opposite Jack Webb’s Pat Novak for Hire, but also old ladies, heart broken mothers, busybodies, and little girls.

Virginia Gregg was the type of actress that made radio work.  She was the type of professional that radio depended on.  She could counted on to play any role and play it to the hilt. Jack Webb on Dragnet could call on Gregg to be tough as nails, quirky, or heartbroken, and she’d do it. During the Yours Truly Johnny Dollar serials, Gregg appeared regularly. One week she’d play a girl gone wrong, the next she’d play a big and rowdy Irishwoman who ran a dive.

Certainly Gregg wasn’t the only actress who could do this. But she was one of the most prolific, and she was the best. Without her performances, the Golden Age of radio wouldn’t have shined near as much. So she is clearly one of radio’s most indispensable people.