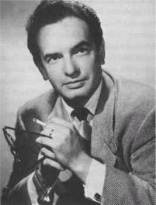 Lewis was often known as Mr. Radio. His career over the air was multi-faceted and has left an indelible mark. He was a talented dramatic actor. He played Captain Philip Kearney in the well-remembered Voyages of the Scarlet Queen. He also took his turn as a radio detective in both The Casebook of Gregory Hood and played Archie Goodwin in Mutual’s Amazing Nero Wolfe, and then starred with his then-wife Cathy Lewis in On Stage which pushed him into a wide variety of genres.

Elliot Lewis, a talented actor, and great producer of radio dramas well deserves his ranking as one of radio’s ten most essential people.

← Telefilm Review: Murder on the Links
EP0897: Frank Race: The Adventure of the Gold Worshipper →