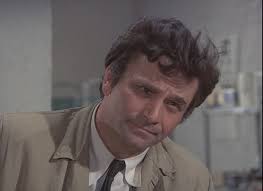 Peter Falks run as Columbo can be divided into two sections. The first ran from 1971-78 over NBC as part of the network’s Mystery Wheel. Columbo returned in 1989 over ABC in a series of TV movies.

There were four key differences between the newer Columbo films and the originals:

Most of the original Columbo films had a 90 minute time slot which made them about 70-75 minutes without commercials. The new Columbo films took up 2 hours and had running time of approximately 90 minutes. I have to admit that in general, this was a case of “less is more.”

One key example was the second ABC Columbo, “Murder, Smoke, and Shadows” where the film started really strong but dragged on too long and at the end of Columbo’s denouement we had (and I kid you not), the police coming out and doing a musical number when they announced the arrest.

The old Columbos worked because of their limitations. They didn’t go on forever and ever, and when there was a longer case thrown in such as with, “A Friend Indeed,” the time was well-spent while the only new film that I think actually benefited from the longer running time was, “Agenda for Murder.”

Columbo in the 1970s remains a mostly tasteful family friendly TV show. The latter Columbo could be something else with a lot more sex in the plot and a lot more skin on the screen.   There were a few episodes with featured lurid plots and disturbing murder scenes. Of course, this isn’t to say that all of the latter Columbos were strictly adult affairs, but there were quite a few that pushed the envelope.

The general incidents and prevalence of sex and violence in the media and on various TV shows is certainly for a debate. I think that with a couple of exceptions, it tended to detract rather than add from Columbo. At its core, the strength of Columbo are great characters and their interactions, and the episodes that tended to have the most adult content such as, Uneasy Lies the Crown and Murder: A Self Portrait tended to not to sacrafice quality charagers. If there was an episode that seemed more “Grown up” that did work, it was, “It’s All in the Game” starring Faye Dunaway as a suspect who is trying to seduce Columbo to keep him off her trail but that works because of the character interactions.

Too often, the content inserted comes off as gratuitous or trashy. The seventies series was more stylish and tasteful.

Of the 44 1970s Columbo films, only one messed with the formula of Columbo being an inverted mystery (Season 5’s Last Salute to the Commodore). Of the twenty-four revived shows, there were half a dozen different attempts to break with the formula. These variations ranged from following the killer up to the point of the murder and finding someone else had already committed the murder, not showing the murder and then planting doubt as to the killer’s guilt, and then there were two adaptations of Ed McBain novels.

While Last Salute to the Commodore was one of my two least favorite 1970s episodes, some of these later experiments aren’t too bad. Rest in Peace, Mrs. Columbo begins with the funeral of “Mrs. Columbo” and is then told through flashback from the point of view of a woman seeking revenge on the good Lieutenant  through murdering his wife. The McBain novel adaptation, Undercover is a fine thriller if you can get past the fact that Columbo’s behavior is completely inconsistent with everything we know of the character. Columbo Cries Wolf had its moments.

The other three are more problematic but not for messing with the formula but for other issues. Still, I have to say that while the revived Columbos that go in other directions can actually be entertaining, they still can’t beat the best of the “normal” Columbo episodes.

The original Columbo, even more than its plots were known for the amazing casting. Among the actors who played Columbo killers in the gold old days were Anne Baxter, Robert Culp, Leonard Nimoy, Roddy McDowell, Martin Landau, Dick Van Dyke, Patrick McGoohan, Ricardo Montalban, Ruth Gordon, and so many more. Peter Falk was a fantastic actor and had great chemistry with so many guest stars.

The new series had a virtual power outage, particularly in 1989 and 1990. Of the first eleven villains, the only actor in Falk’s league was Patrick McGhoohan. The second best of the group was Fisher Stevens. A big let down from the 1970s.

The series did better guest stars between 1991-94 when Columbo cut back from 4-6 films a years to between 2 and 3 films a year with better stars. The results were among the best of the new series as Faye Dunaway was nominated for both an Emmy and a Golden Glove for her apeparance, and Dabney Coleman, George Hamilton, and Rip Torn turned in memorable and satisfying performances.

Of course, not even a good guest star could save some films. A mustached William Shatner’s is miscast in Butterfly in Shades of Grey. Tyne Daley did the best she could with a fairly stereotypical flirty lush roll in, A Bird in the Hand but deserved far better as a Columbo villainess.

There did seem to be a fair share more stories in the later years that strained credulity in terms of motive or were just plain derivative (i.e. Stange Bedfellows.)

Yet, the one thing that remained the same was Peter Falk. There are episodes were it felt like the only thing good in the movie was Columbo…but almost always that still made it worth watching. There’s so much in every moment when Falk’s on the screen that he can carry the show by himself which was a good thing because he often had to.

By almost every measure, ABC’s Columbo was an inferior product to its predecessor, but it provided two dozen opportunities to see Peter Falk in action as his greatest character and that alone makes them worth viewing.

5 comments for “Four Difference Between 1970s and Later Columbos”