Ken and Pegon go to Sicily to take on the mafia. The only clue they have is the last words of a dying circus performer.

END_OF_DOCUMENT_TOKEN_TO_BE_REPLACED

Brad picks up a young woman hitchhiking and agrees to search for her missing father.

A woman meets Casey in a bar and offers him information on the killing of a jockey…in exchange for $10,000.
Original Air Date: May 22, 1947
Support the show monthly at patreon.greatdetectives.net 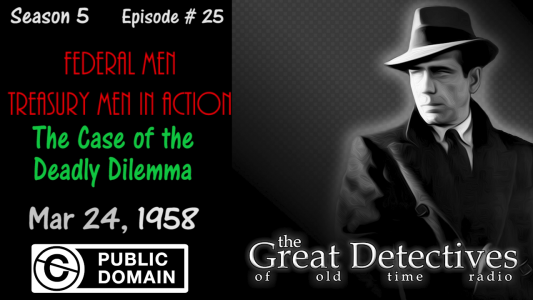 Video Theater 200: Treasury Men in Action: The Case of the Deadly Dilemma

A Treasury Agent (Charles Bronson) wants to get in good with a criminal and gets an opportunity…if he performs a hit job.

Season Nine of Black Jack Justice sees Jack (Christopher Mott) and Trixie Dixon (Andrea Lyons) back for six more investigations. The ninth season continues the same high standard. It offers everything you come to expect: The opening monologue that introduces a well-worn aphorism as a basis for the case, the clever banter, and the solid mystery stories you come to expect.

Jack’s status as a newly married man has a small impact on the series. Had there been romantic tension between the two lead characters, it would have been much more major. However, unlike in most detective fiction, where statements of contempt hide passionate love, the statements of contempt between Jack and Trixie reflected that they didn’t much like each other personally but had a good working relationship. However, Jack’s mood is less dour than in past seasons as he’s enjoying conjugal bliss. One episode, “Home for the Holidays” saw Jack getting involved in solving a crime in a small town so Jack could get home to his wife.

The series had limited appearances from the recurring guest cast. Jack’s wife is seen and not heard after appearing in the previous two seasons. King the office dog and Freddy the Finger are far less present than in previous seasons.

The episodes are all good. I particularly liked the contrast between the last two episodes of the season. In “The Big Time,” Jack and Trixie get an unexpected opportunity to take on a big case for an insurance company with a big payoff. This is followed by, “The Learner’s Permit” where they agree to help a writer do research for his new detective story, and then bungle their way into a murder investigation where they should be able to tell the police everything needed to solve the case and provide photographic evidence, but instead have bungled it so badly that someone else has to step in and solve the case. Creating a contrast between a high water mark and one of their most embarrassing moments business is a clever take by writer Gregg Taylor.

While I did miss some of the recurring characters, this was still a fun listen. If you enjoyed any of the past Black Jack Justice seasons, Season 9 is well-worth listening to.

Black Jack Justice Season 9 is available to listen to for free at Decoder Ring Theatre.

A Narcotics Bureau special agent travels to Turkey to find a source of heroin coming to the U.S.

When a private detective working for Johnny is murdered, Johnny ends up being drawn into the investigation in order to protect the insurance case he and the murdered detective were investigating.
Original AIr Date:October 6, 1951