Frank Nelson is probably best remembered as a long-time radio presence as a regular on the Jack Benny Show. However, his career as one of radio comedy’s most powerful character actors dated back well before that. He was practically a regular on the Lux Radio Theater in the mid-1930s. His 1940s radio work reads like a who’s who of comedy including work with Eddie Cantor, Abbott and Costello, Burns and Allen, Lucille Ball, and Eve Arden. His career also included appearances on Yours Truly Johnny Dollar. In 1949, he played the boss of Jeff Regan (Frank Graham) in CBS reboot of the series and put an entirely different spin on the character of Anthony J Lyon.

89) Bill Goodwin: To most people, commercials are merely interuptions in their entertainment. However, Bill Goodwin was the master of making commercials entertaining. Working as an announcer for Bob Hope and later for George Burns and Gracie Allen, Goodwin made the commercial breaks entertaining and laugh out loud hilarious as he inserted ads for Swan Soap or Maxwell House Coffee into the plot of the story with comedic brilliance. In addition to his announcing gigs, Goodwin was a reliable comedic actor, often appearing on Screen Guild Theatre and Lux Radio Theater.

There are a few entries on this list that will be for two people because it’s hard to imagine one without the other. Such is the case with legendary writers David Friedkin and Morton Fine. The two collaborated on writing many classic episodes of Escape, Suspense, and Crime Classics. They even wrote the first audition episode for Gunsmoke which imagined the series as Philip Marlowe set in the old west. Their biggest collaboration was Broadway’s My Beat. Their writing style was crisp and poetic. They were masters at getting an audience emotionally involved in their stories. The team went on to bigger things in Television, but in my opinion they did some of their best work on the radio. 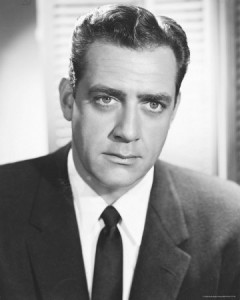 Raymond Burr would find stardom in television as Perry Mason. His radio career began a decade before. Burr was a character actor for most of his radio career, playing roles similar to those taken by William Conrad with many heavies and cops, although Burr was not nearly as prolific. Burr provided support for programs like Suspense, The Line-Up, and Yours Truly Johnny Dollar. In addition, he worked himself into two recurring roles in crime dramas featuring Jack Webb. He was radio’s most brutal cop, Inspector Hellman of San Francisco Homicide on Pat Novak for Hire. He then joined Webb on Dragnet as Ed Backstrand, Chief of Detectives. Even though he was only 32, Burr projected all the authority the role required and was a bit of a show stealer during his five months on the show. Towards the twilight of radio’s golden age, Burr finally landed a lead role on radio as Captain Lee Quince in Norman Macdonnell’s brilliant western Fort Laramie, which he left to begin filming Perry Mason. Even after landing the role of his career, Burr made occasional appearances on radio for Suspense, The Family Theater, and the Salvation Army’s Heartbeat Theater.

While not the peak of Sinatra’s appeal, the Golden Age of Radio played a big part in the Chairman of the Board’s career. He sang with Tommy Dorsey in the early 1940s, and in the mid-40s, his albums were regularly featured inYour Hit Parade. He became known as an upcoming star beloved by the bobby socks set. Radio comedians had fun with him  as a guest joking about his rail thin figure. Another recurring joke had him as a rival of Bing Crosby, although he didn’t eclipse Crosby for many years. Radio was there for Sinatra when his career was on the rocks in 1953. NBC gave him the role of Rocky Fortune, a footloose and fancy free young man who found mystery and adventure at every job he took. Unlike Dick Powell in Richard Diamond, Sinatra eschewed singing on the program and did the show as a typical crime drama. A best supporting actor win by Sinatra for his performance in From Here to Eternity placed his career back on solid footing and thus put an end to the jobless adventures of Rocky Fortune, but the series along with Sinatra’s other work, has left an indellible impression on radio.

If you enjoyed this post, you can have new posts about Detective stories and the golden age of radio and television delivered automatically to your Kindle.
Welcome to the Great Detectives of Old Time Radio. We will feature six of Old Time Radio's great detectives from the beginning of the career to the very last episode in existence with a new episode posted Monday-Saturday.
In addition, twice a month, we'll post a public domain movie or TV mystery or detective show as a bonus.
Along the way, I'll provide you my commentary and offer you opportunities to interact. This is going to be fun and exciting. I hope you'll join me for the trip.
If you'd like to join the adventure with all the great shows that are featured as part of our line up, click here to add this podcast to your Itunes, click here to subscribe to this feed using any other feed reader.
If you'd like an even more in-depth experience, get our Iphones App from the Itunes store from or our Android App from the Amazon App. store and get bonus episodes featuring the stars of our shows in non-Detective roles.
You can follow me on Twitter and become a fan on Facebook
Welcome back. Hope you're ready for another great mystery.