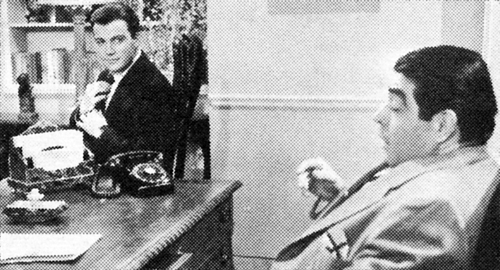 This fascinating casting choice has come to light on several blogs via a March 14, 1959 article in the New York Times that wrote of CBS signing Shatner to play the role of Archie Goodwin with Kurt Kasznar as Wolfe.

Information has been added to Wikipedia about the series including an article purportedly from the Baltimore Sun TV critic Donald Kirkley who suggested that the pilot had been a tad too successful:

Everything seemed to point to a sale of the series. A facsimile of the brownstone house in which Wolfe lives in the novels … was found in Grammercy Square. But when the film was made and shown around, it was considered too good to be confined to half an hour. There was a new shuffle and deal, and in consequence, an hour-long, new pilot is now being photographed in Hollywood.

This new information raises a couple of interesting points. First of all, it exposes that one myth newer Nero Wolfe fans have been told repeatedly is bunk. The myth is that after the failure of the last radio episode of Nero Wolfe in 1951 that Rex Stout foreclosed the possibility of any other English-language adaptations of the great detective. Clearly, this is false as he’d given CBS the green light for the TV series. I’ll have to make some corrections to a few things as a result of this new information. Hopefully, others who have written about Nero Wolfe will do the same.

Secondly, it raises an interesting question in terms of what type of Archie Goodwin William Shatner would have made. Shatner, at this point is a known quantity, most famously from his role on Star Trek.  His style in Trek has been parodied for its occasional hammyness. This reputation has been furthered by Shatner’s interpretations of songs such as Mr. Tambourine Man and Rocket Man have furthered this reputation, as perhaps has Shatner’s starring roles as supercop TJ Hooker and his Emmy Award winning performance as egomaniacal Denny Crane.

In 1959 though, all of this was in the future. Shatner was a much sought-after young talent, who made his first big splash on television in a two part Studio One episode that became the basis for the Defenders. When beginning the film of Nero Wolfe, he was only 28 and six years away from his first TV series, “For the People.”  In the interim period, he remained in demand as a TV guest star on a variety of shows including The Twilight Zone,  77 Sunset Strip, and The Naked City.

For my part I’d definitely love to see how the young Mr. Shatner handled the role of Archie Goodwin. If the TV Pilot ever becomes available, I’ll be first in line to see it.