George Burns and Gracie Allen won the hearts of millions by coming into their homes over radio and television for more than two decades. It’s often forgotten that the two also appeared in films in the 1930s. A 2003 DVD from Universal Home Entertainment collects three of these rare films.

Here Comes Cookie (1935): In this one, Gracie plays the daughter of a wealthy man who fears that his daughter’s beau is a fortune hunter, so he decides to leave everything to Gracie. Gracie gets the idea that her father wants the family to be as poor as possible. This is a screwball piece and Gracie has some good moments, though George is relegated to a bit role. The film is a fun screwball affair with some old vaudeville actors featured.

Six of a Kind (1934): Like many of the Burns and Allen films, Six of a Kind is an all-star comedy. This one also features W.C. Fields and Charles Ruggles, along with Mary Boland and Allison Skipworth.

The plot involves a meek man (Ruggles) going on vacation unwittingly carrying $50,000 from his bank. George and Gracie sign on as travelling companions to share the ride. W.C. Fields comes into the story as a Sheriff and replicates a famous scene shooting pool from his Vaudeville days. Gracie has some hilarious lines, and George even gets a few laughs in as well.

Love in Bloom (1935): George and Gracie get the least screen time in the longest feature on the DVD. While they’re featured prominently in the credits, they have bit roles as the heroine’s brother and sister-in-law. The heroine (Dixie Lee) comes from a circus family and wants a decent, honest life, but struggles to escape her background even as she falls in love with a talented young singer/songwriter (Joe Morrison) and they go to work in a music shop on the strength of her salesmanship skills and his talent. The film is really a romance rather than a comedy and George and Gracie are pretty much side characters with them having a couple funny moments: one where Gracie tries to get out of a ticket and another where she tries to “sell” the music store to its owner. Beyond that, the movie is worthwhile when given a chance. Joe Morrison isn’t the best leading man but he’s got a good voice and Dixie Lee’s performance coupled with the old fashioned decency of the story, give it a certain charm despite its flaws.

Overall, the rare films on this DVD, while by no means in the same class as the greatest comedies of the era, are enjoyable. If you’re a fan of Burns and Allen, it’s a bonus as you get to see some of their work in films. However, to get acquainted with them at their best, their radio and TV performances are still the best bet. 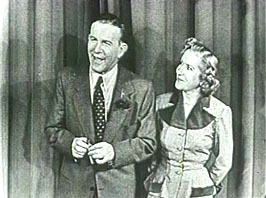