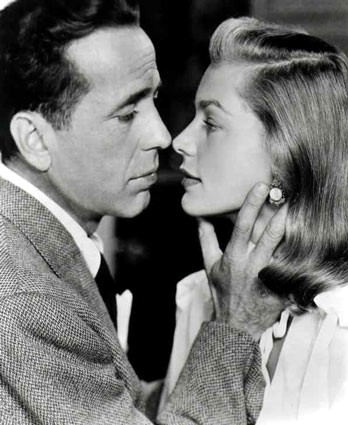 Humphrey Bogart and Lauren Becall followed other stars including Alan Ladd to the radio in their own syndicated program.In Bold Venture, radio offers us a performances from one of Hollywood’s most celebrated couples in Hollywood History.

The show’s premise called to mind, their early appearance together in To Have or Have Not with Bogart playing Slade Shannon, a rough and rugged man of the world running a hotel called, “Shannon’s Place” and also a boat called, “The Bold Venture.”. Becall plays the sassy Sailor Duvall whose father was a friend of Slade. Slade was asked to take care of her. However, their relationship is far from father-daughter.

The program has several strong points:

3) The Dialogue-Characters in this show deliver great dialogue ranging from wisecracking to merely sardonic.  Sailor Duvall has to rank right up near the top when it comes to wise-cracking radio characters with Becall playing the character with plenty of spunk.

4) The Chemistry-Clearly the Becall-Bogie chemistry is on full display here. They play off each other very well throughout each point in the episode right up to the signature sultry love scene at the end of each show.

The one problem with Bold Venture is the plots. The story lines quickly become predictable with someone trying to scam Slate Shannon or involve him in a crime. Shannon good-naturedly falls for the villain’s scheme with the lights only going on in the last few minutes of the program. In between the opening theme and the closing love scene, they’ll be about three or four dead bodies, with little question about whodunit. To be fair, in the latter programs, the plots improve as writers David Fine and Mort Friedkin cannabalize some Broadway’s My Beat plots to make for more interesting stories.

Despite the weak early plots, Bold Venture remains one of radio’s most entertaining programs. It was recorded in 1951-52 by Becall and Bogart for legendary syndicator Frederick Ziv. Fifty-seven of the seventy-eight episodes are in circulation. (Episodes 1-56 and 60.) Most are available in High Quality at Archive.org. The rest are available in decent sound quality in another section.