Green Acres on the Radio 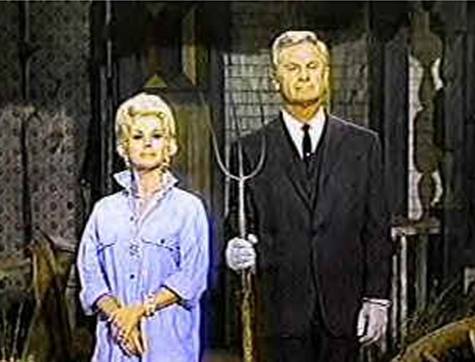 If you mention Green Acres, people think of the 1965-71 Sitcom starring Eddie Albert and Eva Gabor. But fifteen years before Green Acres came to TV,  it came to radio.

The radio Green Acres were written by a 33-year old writer, who would go on to write 150 of the 170 TV episodes of Green Acres.

There were quite a few similarities between the radio and TV versions of Green Acres. Both featured a scatter-brained Mr. Kimball (although the radio Mr. Kimball ran the county store rather than being the County Agent.) Granby also had a farm hand named Eb. The radio show had some good bits that Sommers would dust off for early TV episodes.

An early Green Acres TV episode where Oliver can’t decide what to plant has its basis in the radio episode, “Mr. Granby Plants a Crop.”

And this great little bit of dialogue also came from the radio show originally:

Oliver: I’d take a seed, a tiny little seed, I’d plant it in the ground, I’d put some dirt on it, I’d water it, and pretty soon, do you know what I would have?
Lisa: A dirty little wet seed.

At the end of the radio run. John Granby (Gale Gordon) told listeners to send letters in to their local CBS station with their thoughts on Granby’s Green Acres.  The show never returned to the air.

There were many reasons the show didn’t make it in 1950. One big one might be that Granby’s Green Acres was not a show that audiences were ready for. Americans had migrated in large numbers to cities like New York and Los Angeles in search of economic opportunities. Granby’s desire to move to the country seemed absurd. When Green Acres appeared on TV, it was a very different world with violence and unrest, crime on the rise, and social unrest. Moving to Hooterville sounded a lot less crazy and made us more sympathetic with Mr. Douglas.

The biggest problem with Granby’s Green Acres may have been that it just wasn’t ready for prime time. Granby is too much of a cantankerous blowhard.  The radio version gives you an appreciation of the talent with which Eddie Albert played the role of Oliver Wendell Douglas, as a complex mix of bombast, idealism, practicality, and romance that made the character a joy to watch.

In the radio version, Sommers only had given real airtime to Mr. Kimball from the store, and a know it all County Agent who always ate Granby’s supper.  Pretty thin gruel.

Not continuing Granby’s Green Acres was a smart decision. Even with great comics like Burns and Allen leaving radio for television, radio comedy was still undergoing a golden age and Sommers creation simply was not in the same league as shows like Our Miss Brooks,  Life of Riley, and Life with Luigi.

It also had a nice aftermath. Sommers continued to develop as a writer and work the world of television, writing on such shows as Amos and Andy, Dennis the Menace, and Petticoat Junction.  When Green Acres came back, it became one of television’s best sitcoms.

It featured Pat Buttram turning in the role Mr. Haney who was always trying to sell Mr. Douglas something, Eva Gabor as the sweet but often confusing Hungarian Princess Lisa Douglas,  and the Ziffels who treat their pig like he’s their son, and much more.

While the radio show didn’t have these elements, it serves as a rough draft of Green Acres, which makes it an interesting listen.

IMDB has the first five season of Green Acres available for instant watch.