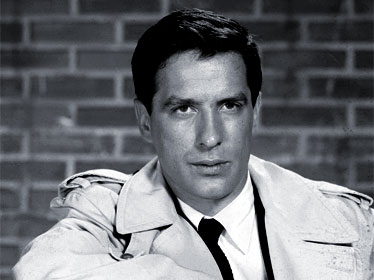 Johnny Staccato was one of those shows that acquired a cult following and could never do much else. It’s 27 episode-run from 1959-60 assured it would never make it far in syndication. It’s star, John Cassevetes didn’t care for the show and had only taken the job to pay off some personal debts.  Cassavettes went so far as to publicly criticize the show in his successful effort to escape in his contract in the middle of the 39-episode season.

Still, the fans have made their feelings known. Those who remember Staccato gave it a fat 8.8 rating on a 10 point scale. For years, Staccato was entirely the province of grey market DVD makers. Now, thanks to Timeless Media, I can evaluate whether Cassavettes was right or the fans? For the most part, the answer is the fans.

More than a P.I. Show

First of all, I have to compliment Timeless Media on the quality of the recordings in their complete Johnny Staccato Box Set.  I’m pretty well used to the somewhat poorly aged prints that dominate TV reruns and public domain video. Somebody put a lot of work into making Johnny Staccato a great release. The video and sound are great even on my old analog set. It was a pleasure to see and listen to. While some would complain about the lack of extras, I can’t really expect many extras  when we’re dealing with a 51 year old show that was cancelled mid-season and where the star has been dead for 20 years. I’m thankful they got the show out and in such a beautiful form.

It can be tempting to write Johnny Staccato off as merely a ripoff of Peter Gunn. After all, both Staccato and Gunn are New York P.I.’s that hang around the jazz scene. The big difference with Staccato is that jazz isn’t just something he hangs around for information, but he’s truly a part of it as a musician. The scenes of Staccato on the piano are priceless. The music of the lates 50s pulses through Johnny Staccato.

In addition, every episode of Peter Gunn seems to end with at least two, and usually four dead bodies. Staccato often ended the show with no dead bodies. Cassavettes influence made Johnny Stacatto much more a Detective Drama than it did Peter Gunn’s shooting gallery.

Also, another big difference between Peter Gunn and Johnny Staccato is that while “Mother” in Peter Gunn seemed to exist in the story primarily as a plot device and the owner of Peter Gunn’s favorite hangout, Waldo (Eduardo Ciannelli) who owns Johnny’s favorite spot is a far more fleshed out and there’s an almost father-son dynamic of their relationship.

As a Private Detective, while Craig Stevens who played Peter Gunn looked and sounded like he was out of central casting for a detective hero, Cassavettes didn’t have the look of  a great detective hero. Perhaps, it was because I first saw him playing the murderer in the Columbo movie,  “Etude in Black”, but it took me a while to buy him as a hero. However, Staccato after a while Staccato’s looks became a plus.

Staccato was a Korean War Veteran who rarely became involved in cases for the money. He rushed off to help his friends and solve cases with little concern for fees. He was the proverbial knight in tarnished armor.

Staccato’s cases occassionally fell under the category of “typical PI fare” such as in, “House of the Four Winds,” where Johnny deals with trouble in Chinatown  and “Night of Jeopardy,” where Johnny shoots a counterfeiter and now the mob is after him for the plates.  In “Act of Terror,” Johnny is hired by a hypnotist to find his missing wife but Johnny becomes suspicious that the man (and his dummy) may know more than they’re letting on. In these sort of rough and tumble situations, Staccato handled himself as well as any detective on television.

Other episodes had far deeper dramatic and even moral meaning. In “Evil,” Johnny takes on a huckster who is using a mission to scam people out oof money. This episode took a few clever turns. In, “Tempted,” Johnny has a chance to take a beautiful woman and $200,000 necklace. In the, “Return,” Johnny has to stop a Korean War Veteran who escaped from a mental hospital from killing his wife. In, “Solomon,” Johnny is asked to commit perjury by the city’s greatest defemse attorney in order to acquit a client the lawyer believes to be innocent.

Of the first 23 episodes, I’d say 22 are are among the best hour detective shows of the era (the exception to this being, “Double Feature” which added nothing to the silly “everyone has a double” plots that many shows just have to try.) It was towards the end of the run that the show began to fade. Cassavettes wanted out, and it began to show on the screen starting with, “An Angry Young Man” in which the story was weak and had Johnny unbelievably moving rhythmically to the polka. The show bounced back a bit with “The Mask of Jason” which featured a young Mary Tyler Moore as a beauty queen scared of an ugly man, but by the end of the episode, the audience has to wonder where the real ugliness lay.

The last two episodes were straight downhill. In “A Nice Little Town,” the writers go literally out of their way to make a political point, sending Johnny out of New York to a small town where a former U.S. soldier who had defected to the North Korean side had been murdered by two men in absurd masks. We then get to watch unlikable townfolks attack Johnny for not having an American name and for being either a commie or stupid. The episode concludes without Johnny capturing the killers, so that Johnny can make a speech to the strawman anti-communist town. Whether Cassavettes was concerned with making a political point, trying to impress avante garde activist types, or pushing the storyline in hopes that it would help the show get cancelled due to public outcry and get him out of his contract, or some combination of the three, we don’t know.  However, no record exists suggests that the episode played any part in Staccato’s exit.

The last episode of Johnny Staccato was, “Swinging Long Hair,” which was odd as no one in the episode had long hair. The episode had some great music, but was one of the shabbiest shows of the series in terms of its writing. It ends with Stacatto remarking that one of the bad guys still needed to be killed but as someone else would have to do it as, “I’ve had it.”  Thus star and character bid farewell together.

While the show’s quick decline was sad to watch, the quality and greatness of the first 23 episodes make this set well worth owning and I’m glad that I do. Johnny Stacatto was a great show and there may have been more episodes if John Cassavettes had agreed.