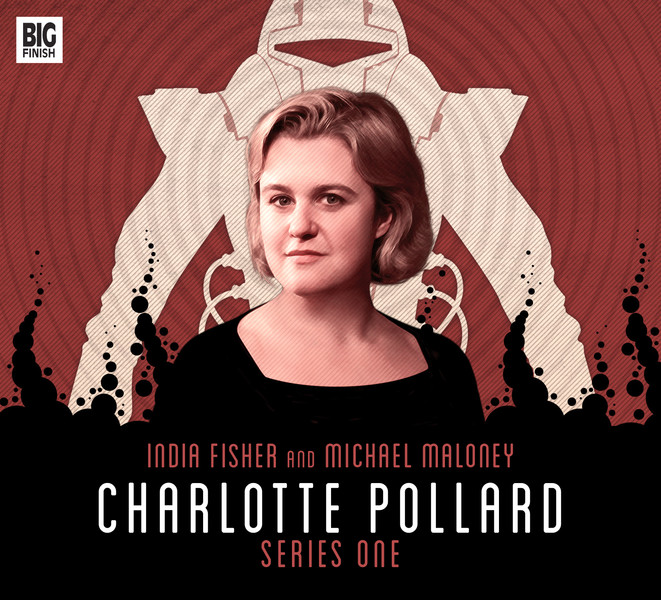 As we continue to honor Big Finish’s 15th Anniversary of doing Doctor Who Audio plays, we’ll take a look now at their latest Doctor Who Spinoff series, Charlotte Pollard.

Charley Pollard (India Fisher) was introduced as Eighth Doctor Paul McGann’s companion in 2001 and continued in that role until 2007. She is most aptly described as an Edwardian Adventuress, originally from the 1930s. In 2007, she departed from the Eighth Doctor, falsely believing him to have died. She then ended up travelling with the Sixth Doctor, a previous regeneration which caused untold paradoxes. She ended up leaving the Sixth Doctor in 2009’s Blue Forgotten Planet, and began travelling with the Viyrans, a race dedicated to ridding the universe of a series of viruses released in an explosion.

The Charlotte Pollard Box Set features four adventures of about an hour as Charley breaks free of the Viyrans and begins her own adventures.

This story picks up with Charley continuing her work for the Viyrans who have been repeatedly using her services for a time and then putting her into Chryogenic sleep until needed in. Charley is not happy with this life though she believes the Viyrans intents are altruistic. However, when a mysterious Viyran who is different from the semi-automotons of that race offers her a chance to escape she takes it and eventually makes it.

This is a necessary chapter as it does a great job establishing where Charley is at and Robert Buckham Jr. (James Joyce) and others who would be play a key role in the story. It also does the necessary work of introducing people to the character who hadn’t followed the Doctor Who stories Charley appeared in.

2) The Shadow at the Edge of the World:

Charley escapes from the Viyrans via the Forever and Ever Perlexity and finds herself in the 1930s wandering with a group of women who are the last survivors of an expedition. The story has plenty of suspense and atmosphere and is a great all female performance. (With the exception of monster voices done by Producer Nick Briggs.)

3) The Fall of the House of Pollard

This story focuses on Charley’s family and at last she returns home only to find how much her disappearance has affected them. At times, the pacing is a little slow as it takes quite for Charley to interact with her parents. The way Charley actually gets home is oddly contrived and doesn’t make much sense, the cruel treatment of the character of Michael Dee seems gratuitous, and the ending is disappointing. Still, the scenes with Charley and her family are moving with Terrance Hardiman and Anneke Wills turning in solid performances as Lord and Lady Pollard. This one works primarily as a character piece that probes issues rarely raised in the classic Doctor Who series about what happens to the families of those who travel in time and space.

Charley is back with the Viyrans and learns that the virus hunting cyborgs have come up with a solution to eliminating all viruses but it’s one that is so insane that the entire Universe depends on her discovering it and thwarting it. Meanwhile, Robert Buckham Sr. has other plans to use the Viyrans for his own profit.

The story concludes in a way that could mark, a “the end” moment for Charley or could leave the door open for future installments.

This also comes with a bonus “making of” CD with more than an hour of interviews with writers and cast members on each episode.

The series has some high points. Throughout, everyone performs well. Though Charley is a bit more cynical than her run with the Doctor, she still a likable character who delivers some great lines, particularly in Episode 4. The story concepts are interesting particularly in Episode 2, which gives a good idea of what Charley would be like in an adventure where the Viyrans were not playing such a huge role as pursuers.

The downside as I see it is that Charley’s actual role in these drams is a bit too passive. Charley doesn’t come up with clever plans or even take initiative for the most part. For example, her escape from the Viyrans in the first episode wasn’t really her idea. While she makes a couple key decision in Episodes 2 and 4, the first box set of Charlotte Pollard is much more about things happening to Charley rather than her doing anything or making anything happen. That’s fine if you’re the sidekick. Not so much if you’re the main character.

However, I hope there is a second series of adventures. Charley’s definitely a fun character with a very unique voice. The stories are well-written and intelligent, and the folks at Big Finish are consummate professionals whose use of sound effects makes the story come to life with fantastic sound effects.