Riding the wave of the next big thing in radio, the fledgling ABC network premiered not one, but two separate hard-boiled detective programs on January 21, 1946. The biggest hit of these was the Fat Man which followed the adventures of private detective Brad Runyon.

The Fat Man was advertised as “Dashiell Hammett’s most exciting character” despite the fact Hammett had little to do with the writing of any of the radio shows based on his characters. The Fat Man was created as a composite of the Thin Man and the Continental Op.

Whatever his origins, the Fat Man became one of radio’s great icons with its opening:

There he goes, into that drugstore. He’s stepping on the scales. Weight: 239 pounds. Fortune: Danger. Who is it? THE FAT MAN

The way that Fat Man (J. Scott Smart)  pronounced “murder” was also one of his trademarks that fans remember. In the first episode Runyon declared, “Nobody loves a Fat Man.” Radio audiences begged to differ as the show lasted six seasons and he became one of few detectives to take his role on screen.

Due to concern about Dashiell Hammett’s Communist ties, the show had trouble holding a sponsor, particularly as radio headed into its declining years and it was cancelled in 1951.

How long lasting and popular the show had been is often obscured by the fact that only 10 episodes are in circulation. However for comparison, Smart played the Fat Man longer than The Adventures of Sam Spade were on the air and longer than Bob Bailey played Yours Truly Johnny Dollar. The lack of episodes is probably due to the show being tied to Hammett as well as having aired on the fledgling ABC network. Hopefully, more episodes will somehow emerge in the future.

The concept was revived in Australia in the mid-1950s with a series of fifty-two episodes starring noted stage radio screen actor Lloyd Berrell that were broadcast by the Australian Broadcasting Corporation. The episodes appear to have used scripts from the American series that aren’t in circulation.

J. Scott Smart (1902-1960) was an accomplished actor of stage, screen, and radio as well as a musician and music historian. Prior to taking on the role of the Fat Man, he was perhaps best known for his appearances on Fred Allen’s show as part of Allen’s Alley. He was also a character actor appearing in several of CBS 1937 Shakespeare productions in character roles.
More information on Jack Smart and the Fat Man is available here. 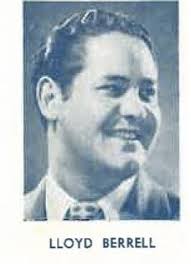 Lloyd Berrell (1926-57): The New Zealand-born Berrell was a noted star of Australian stage and radio, as well as appearing in a handful of films that were made in Australia. In 1953, Berrell received the Macquarie Award for best radio actor.

Christmas Special Played Out of Order:

New Episodes are posted every Tuesday.

6 comments for “The Fat Man”