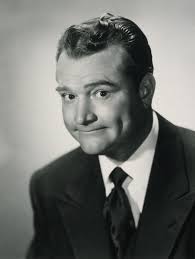 Wally “The Fox” Benton goes down South to solve the murder of a woman’s boyfriend.

Vote for the Great Detectives of Old Time Radio every day in the Entertainment Category at the Podcast Awards at http://www.podcastawards.com

END_OF_DOCUMENT_TOKEN_TO_BE_REPLACED

The Whistling Collection from Warner Archives features all three MGM films from the 1940s in which Red Skelton played Wally Benton, an actor/writer who plays the Fox, a radio detective who comes up with his own plots.

In Whistling in the Dark (1941) , Wally, his girlfriend Carol (played by Ann Rutherford), and the sponsor’s daughter are kidnapped by a racketeer who wants to murder a man who is en route to New York. Wally poses a threat to the racketeer’s plans to lay claim to a wealthy woman’s fortune. Wally is forced to come up with a perfect murder plot and he has to figure out how to save his life from it and the life of the two women with him, as well as an innocent man set to die. He does so in a way that’s both ingenuous and hilarious, and it involves a brilliantly madcap fight with the thug Sylvester (Rags Ragland).

In Whistling in Dixie (1942), Wally and Carol travel down South to investigate mysterious goings on in a Southern town including the disappearance of a young man. There the Fox seems to have found Sylvester working for a local judge but it turns out to be his not so evil but just as dub twin brother Chester (also played by Rags Ragland.) There’s a genuine mystery, political corruption, a Confederate treasure, and lots of shenanigans involving twins.

In Whistling in Brooklyn (1943), Wally is framed as Constant Reader, a murderer who has been sending notes to a politician after committing his crimes. Wally has to prove his innocence and his efforts including going undercover as a pitcher on a Major League baseball team in which every player wears a beard. Several real-life Brooklyn Dodgers appear, including then-manager Leo Durocher. Ragland returns as Chester. The whole thing ends up in another madcap fight scene, this time aboard the ship.

Overall, the Whistling movies are a lot of fun. Unlike some lesser comedy detective mysteries, they never seem to forget that the lead isn’t just supposed to be funny, he’s supposed to be a detective. Throughout Wally shows  clever thinking, although his good plans occasionally go wrong. Skelton and Rutherford have strong chemistry. No one will confuse them for William Powell and Myrna Loy, but they make a nice on-screen pairing.

The stories’ take on the radio drama of the era is fun and cute. The first two stories have quite a bit of cleverness behind their plots. The third is a bit more thin. The way Wally is framed weak, and like the second movie is centered on him and his girl trying to get married even though there wasn’t a reason why they wouldn’t have married after Whistling in Dixie. The final third of the movie is funny, but essentially it’s two very long slapstick scenes at the ballpark and aboard the ship with the only breaks being people taking cabs to get one from scene to another. Nothing against slapstick, but I preferred the style of the other two movies better.

Still, all three films are good, and they all work with good performances from the returning cast and nice gags throughout. If you love detective movies with a dash of comedy or just love Red Skelton, this is a great collection to purchase.

f you enjoyed this post, you can have new posts about Detective stories and the golden age of radio and television delivered automatically to your Kindle.

The comedian best known for creating characters such as The Mean Widdle Kid and Clem Kadiddlehopper began first on radio before he hit television.  He was discovered by Rudy Valee and his first major starring role in radio came on Avalon Time in 1939, and then in 1941 he landed his own titular program which he would maintain until 1953 (with the exception of service in World War II before leaving radio for good for the new frontier of television. Skelton’s comedy affected the wider culture as character catch phrases like, “We dood it” entered the popular lexicon. Skelton at times was a challenger to Bob Hope in the ratings numbers, as he remained popular at radio’s zenith. In addition to his legendary style of comedy, Skelton’s program served as a launching pad for the career of two promising younger named Ozzie and Harriet.

35) Glenn MillerThe great band leader was responsible for such hits such as, “Midnight Serenade” and “Chatanooga Choo Choo” made a great impact on radio in his all too short life. Miller was just beginning to enjoy his success. In 1938, his career took a turn and for four years he was a rising star in music. However, in 1942, the war hit  Miller could have avoided military service. At 38, he was too old to be taken to the draft. However, he opted to enter the Army with the full time passion of bringing the highest quality music to American Servicemen. He led the AAF orchestra and the fruits of his efforts can be heard in the program I Sustain the Wings. He performed more than 800 times in England in 1944.  Tragically, Major Glenn Miller’s plane disappeared over the English channel and music and radio lost one of its truly great stars.34) Norman Corwin

Corwin wrote some of the most important and memorable radio writers. He was known for great stories written around the time of World War II such as We Hold These Truths and On a Note of Triumph but he was more versatile than that. He could be whimsical as in his pla “The Plot to Overthrow Christmas” and downright absurd as he was in “Murder at Studio One.”  He could turn write epic adaptations of Old Testaments stories or muse on the foibles of modern man. He was a poet and one of those who utilized the medium of radio in ways that were unique to medium. Corwin touched the hearts and souls of Americans in ways that no other radio writer did.