Vaudevillian Fanny Brice was a talented comic singer, but her greatest contribution was the creation of Baby Snooks, a mischevious little girl who drove Daddy (played by Hanley Stanford) bananas with her comic antics and misbehavior with famous lines like, “Tell me a story, Daddy.” and constantly asking why.  The character began as an act on the Maxwell House Program in the late 1930s and in the 1940s, Snook would get her program. Radio was the perfect medium for Brice.  The act would simply not work on television as Brice played Snooks as about 7 and when she tried to adapt Snooks to television, she was 59 years old. However, in radio, everything was possible and Snooks is forever precociously young and hilarious and the work of Fanny Brice lives on. 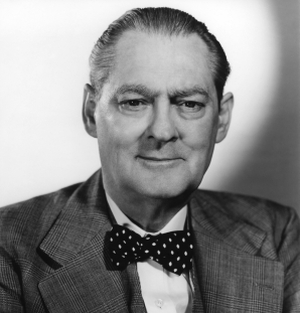 The legendary star of stage and screen starred in the 1940s Drama Mayor of the Town where he portrayed the real painful reality of war with uncommon humanity and then in the late 1940s and early 50s, he recreated his film role as Dr. Gillespie in MGM’s syndicated Dr. Kildare series. He also showcased his talents in numerous anthology shows. However, Barrymore’s position on this list is secured by being radio’s Ebenezer Scrooge. He was the definitive Ebenezer Scrooge, performing the role live all but two Christmases between 1934-53. Barrymore’s success as Scrooge made him a natural to play the villainous Old Man Potter in It’s a Wonderful Life. It’s a pity that’s movie role’s all most people know of his great body of work,.

Hollywood’s quintessential singing cowboy had a rich career over radio. Autry’s Melody Ranch program ran for sixteen years. (1940-56). Autry’s success included not only him, but his horse Champion got his own radio and TV series. Autry was admired by many who wanted to emulate him, so Autry created the cowboy code, ten rules for patriotic and moral living. By doing this, Autry showed the type of class that made him one of America’s most beloved entertainers.

William Johnstone is best known as the second voice of the shadow in 1938 and those four seasons is what he’s best known for. However, Johnstone’s performances go far beyond that. Johnstone was also a solid and indispensable character actor appearing regularly on a wide variety of programs from Cavalcade of America to Yours Truly Johnny Dollar. In 1950, he got his second starring role for CBS in The Line Up playing Lieutenant Ben Guthrie for 3 seasons.

Their work has many detractors among modern fans, particularly their detective shows, but what Anne and Frank Hummert lacked in quality, they made up with the quantity of their productions. The Hummerts produced a dizzying array of shows. Many were in the soap opera genre such as the long-running Ma Perkins program (1937-60), Just Plain Bill, and Amanda of Honeymoon Hill. However, they also were the force behind many mystery programs such as Mr. Keen Tracer of Lost Persons (1937-55), Mr. Charmelon, and Inspector Thorne, comedies such as Easy Aces, and even the iconic juvenile series Little Orphan Annie (1930-42). Anne Hummert had dozens of shows running concurrently, kept track of them, and outlined all plot twists on the daytime serials and directed her army of writers to make the changes. While it’s easy to make fun of the melodrama on some of the Hummerts’ soaps, it’s hard to dismiss their amazing success.