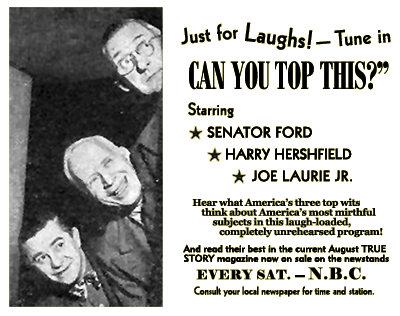 Four guys sitting on a sound stage telling jokes, seeing if anyone can top each other in getting laughs from the audience.  This was the basic concept of, “Can You Top This?” which ran for 12 years. Listeners would send in their jokes, and it would be read by actor Peter Donald who would spice it up with his own mix of dialects and delivery and then Edward “Senator” Ford, Joe Laurie, Jr., and Harry Hirshfield wouldtry to top Donald’s joke with another one on the same topic.  Some of the jokes were already had whiskers in the 1940s and 50s, but the timing of the clown table managed to usually make for quite an entertaining show. As mentioned before, dialects were used, but it was only on a rare occasion that a joke was told that would be truly offensive, and never dirty. The show is a great example of the best of the golden age. The program didn’t offer fabulous prizes (the most anyone could win was $25). It was a show that was about, fun, camaraderie, and talent, ledby Peter Donald and the men who made up this fantastic Clown Table.
Rating: 4.5 out of 5.0
If you enjoyed this post, you can have new posts about Detective stories and the golden age of radio and television delivered automatically to your Kindle.
Welcome to the Great Detectives of Old Time Radio. We will feature six of Old Time Radio's great detectives from the beginning of the career to the very last episode in existence with a new episode posted Monday-Saturday.
In addition, twice a month, we'll post a public domain movie or TV mystery or detective show as a bonus.
Along the way, I'll provide you my commentary and offer you opportunities to interact. This is going to be fun and exciting. I hope you'll join me for the trip.
If you'd like to join the adventure with all the great shows that are featured as part of our line up, click here to add this podcast to your Itunes, click here to subscribe to this feed using any other feed reader.
If you'd like an even more in-depth experience, get our Iphones App from the Itunes store from or our Android App from the Amazon App. store and get bonus episodes featuring the stars of our shows in non-Detective roles.
You can follow me on Twitter and become a fan on Facebook
Welcome back. Hope you're ready for another great mystery.