It’s a Crime, Mr. Collins was a series from late in the Golden Age of radio in the United States. It had a format similar to the 1955 NBC Series, the Adventures of the Abbotts using a similar format but not using the name of the characters, thus avoiding royalty payments to the Abbotts creator Frances Crane. The series starred Mandel Kramer (the last actor to play Pat Abbott) and ran for twenty-nine weeks from August 1956-February 1957. No episodes of this series exists.

What does exist is the Australian version of the series that was syndicated by Macquarie Broadcast Service over twenty-eight stations beginning in March 1957. It starred Melbourne radio staple Keith Eden as Greg Collins and Mary Disney as his wife Gail. The series ran for fifty-two weeks featuring the husband and wife team tackling a wide variety of murder and mystery, and Gail getting jealous frequently because of all the beautiful women involved in these. 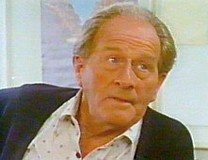 Keith Eden (1917-2003): Eden became one of the standout players in Melbourne, Australia’s radio community in the 1930s and continued to be prominent for decades to come, and successfully made the transition to television in the late 1950s and continued to be active in a wide of variety of productions, making his last TV appearance in 1994 in Blue Heelers.