Chester Gould created Dick Tracy as a syndicated newspaper comic strip in 1931. The strip followed the adventures of Dick Tracy who joins the police force after his fiancee’s father is murdered. Tracy solved all sorts of crimes and he was joined by a colorful supporting cast and would later add a colorful and grotesque rogue’s gallery. The comic strip continues to be published to this day,

Dick Tracy got adapted to other mediums. Dick Tracy was the subject of four separate film serials starring Ralph Byrd between 1937-41, then four B-Feature films between 1945-47, the first two starring Morgan Conway and the latter two starring Byrd, who starred in a live action TV show in 1950-51. An animated series followed in 1960.  There was a TV pilot in 1967 and then Warren Beatty starred in a 1990 film adaptations.

Tracy was also the subject of multiple radio series from 1934-48 that were targeted towards a juvenile audience.  Mostly, the radio programs were serialized with the exception of the April-September 1939 run of self-contained programs and a October 1945-June 1946 run of half hour programs that ran concurrently with the 15-minute version.

In addition, Tracy has starred in numerous comic books and prose books. 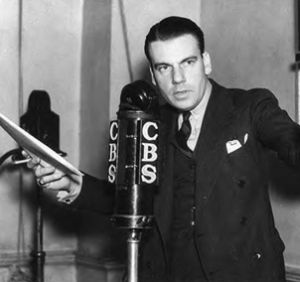 Ned Wever (1902-84): Wever was a Princeton educated composer and actor, with a long career in radio, stage, and screen. Wever composed music for Ed Wynn and Billy Rose. He was best known as the lead in Dick Tracy and Bulldog Drummond., as well as performing in many radio soaps including Young Widder Brown  and Lora Lawton.

Matt Crowley (1905-83): Matt Crowley had a long career in radio, film, and television. He enjoyed his best success in radio, playing the lead role in programs such as Buck Rogers in the 25th Century, Jungle Jim, and Mark Trail. In addition, he played Paul Drake in Perry Mason and Inspector Henderson and Batman in The Adventures of Superman.