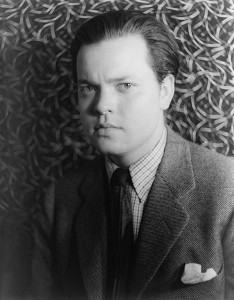 Two of these would merit some consideration for appearance on our list, but all six added together indicates that Welles belongs at the very top.

While most people would best remember him for the 1939 War of the Worlds fright, Welles had many claims to fame both before and after the infamous performance. His `1937 performance of Les Miserables shines as he adapted the story, directed the play, and played the lead role of Jean Valjean as the age 22.

His role as The Shadow in 1937 was a precursor to superheroes like Batman with his performance at the disappearing Shadow.  Then came the Mercury Theater, with War of the Worlds being just one of many well-done one hour adaptations he and his talented team of performers turned out season after season of radio dramas, most being one hour in length.

Even when not on his own programs, there was a certain majesty about Welles and anything he did. His performances on Suspense were legendary including such classics as “The Hitch-hiker, ” “The Lost Special,” and “Donovan’s Brain.”  In addition to this, he also brought Shakespeare to radio, playing Hamlet at age 19 for the Columbia Workshop.

Welles was not without his flaws. His ego led to the end of his brief time hosting Cresta Blanca’s This is My Best and his various problems led him to leave for England and Americans could only hear him by transcription in the 1940s.  He was also a notorious ham. Yet, it must be said he could pay tribute to others like no other man alive possessed the ability.

However, warts and all, Welles remains radio’s most essential person. He came along when radio was still young and audio drama, the youngest of all arts. He showed those who would follow what radio could be.  He stretched its limits and left a legacy that both entertains and amazes after all these years.  And while his film legacy has some highlights, it is radio where Welles did his most consistently great work.